Bards are in 'dreamland' after FA Cup heroics - The Stratford Observer

Bards are in 'dreamland' after FA Cup heroics

PAUL Davis admitted Stratford Town were in ‘dreamland’ after setting up a first-ever appearance in the FA Cup first round against League One visitors Shrewsbury Town.

The Bards head coach saluted his players’ never-say-die spirit after Will Dawes’ late strike ousted National League North Boston United 3-2 in front of more than 1,250 fans on a memorable night at the Arden Garages Stadium on Tuesday.

The club is optimistic the biggest game in the club’s 80-year history against the Shrews will be broadcast live on television, bringing a huge financial boost and increasing the club’s profile nationwide.

Davis said the thrilling result and buzz of cup excitement was deserved reward for everyone associated with the club, particularly those who put in hours and hours of hard work behind the scenes.

“There are so many people around this football club who have worked hard every day and it’s so pleasing to see them with such big smiles on their faces.

“It’s great for the players, and the staff, but it means so much to so many people.”

Town had drawn 1-1 in the fourth qualifying round tie at the Jakemans Community Stadium in Lincolnshire on Saturday after Jaanai Gordon’s goal.

And the replay proved a real cup cracker. It even featured an early floodlight failure before the Bards moved 2-0 ahead just after half-time with two goals from  Gordon. He slotted home the first from Ahmed Obeng’s cutback on 20 minutes and then Gordon added a second seven minutes into the second half, slamming home from Owen James’ delivery. 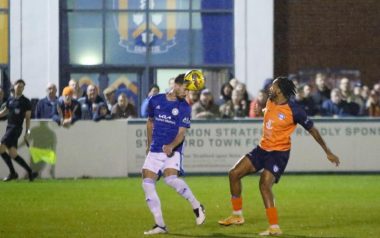 Boston managed to recover to level matters through a double from Joe Leesley, the first direct from a corner on 61 minutes and then a powerful header from Fraser Preston’s cross.

But 13 minutes from time Dawes grabbed the Bards winner, steering the ball past goalkeeper George Sykes-Kenworthy after collecting Obeng’s pass.

“What pleased me most was the character we showed,” said Davis. “To get off the canvas after being pegged back to 2-2 and to go on and score the winning goal was a fantastic effort.

“At 2-0 up it was the most comfortable I had felt in a long time. Then we concede two freak goals to leave the game on tenterhooks. The players took it upon themselves to go on and get the winner.”

Now the Bards can look forward to entertaining a Shrewsbury side sitting fourth form bottom in League One, with three wins from 14 league games so far – and looking to create the biggest upset in their history. “We are under no illusions how difficult it will be but I’m not going to set the players up just to enjoy the day,” said Davis. “We are going out there to try to win a game of football.

“Between now and then we have got lot of league games and we need to pick up our form in that.”

Stratford return to the Southern Premier Central action on Saturday with a trip to Hitchin Town and then entertain AFC Rushden & Diamonds next Tuesday.