Bards looking to rewrite history against Shrews - The Stratford Observer

PAUL Davis warned Stratford Town need to play the match, not the occasion, when they bid for the greatest victory in the club’s 80-year history.

Davis stressed everyone at the Arden Garages Stadium will enjoy being the talk of the nation on Sunday when Shrewsbury Town are the visitors for the club’s first-ever appearance in the FA Cup first round. The game will be broadcast live on ITV4, while a record sold-out crowd of 2,800 will pack the stadium.

It’s going to be a memorable day – but the Bards boss stressed the 90 minutes from 3pm must be the sole focus to upset the League One Shrews.

“The hardest thing is to keep the players’ attention on a game of football,” said Davis. “Of course, it’s a massive moment in the club’s history but my intention as manager, as it is for every game, is to set up the team to go and win a game of football. 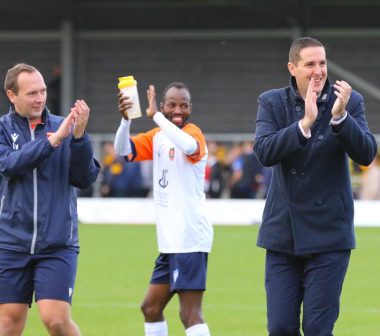 The Bards bowed out of the FA Trophy last week, losing 2-1 at Royston Town in the third qualifying round, despite Enoch Andoh’s consolation goal. It means the Bards have lost twice and won once, since their epic Cup replay win against Boston United set up the Shrews tie but they will have the luxury of a full week to prepare. The planned trip to Alvechurch on Tuesday was moved to November 13 because both sides had a free Saturday following their Trophy exits.

“I must thank Alvechurch for that,” said Davis. “They contacted us and because we are both out of the Trophy they felt it would be better to move it to a week on Saturday.

“It means we can train Tuesday and Thursday and we’ll be in again on Saturday.”

Davis also revealed he had enlisted a few favours from his pals across the football community, particularly Burton Albion.

“Normally I would go myself and watch games but because we’ve played Saturdays and Tuesdays it’s been difficult to watch Shrewsbury,” he added. “But I’ve got some good friends at Football League clubs and I’ve been able to get some recordings of Shrewsbury’s games. I’ve particularly got to thank Burton.”

Shrewsbury, who took Liverpool to a replay last season, sit fourth from bottom in League One, and haven’t won away this term but Davis has no doubts they will be massive favourites.

“They are a full-time, professional club in League One, and play five levels above us,” said. “It will be a huge test for us. “They are a strong team, with good players and an experienced manager.

“But the ITV cameras will be there because there is that chance of an upset. That’s what makes the FA Cup so special.”

Davis hopes the fixture-free week will also allow a few bumps and bangs resulting from the busy schedule to heal to present him a pretty much full squad. Half-a-dozen players were having treatment by physio Amanda Sibanda on Tuesday. One absentee, however, could be defender Joe Magunda who was sent off against Hitchin two weeks ago.

Fans are being urged to use a park-and-ride from the town centre to the Tiddington ground on Sunday, After the club worked with Stratford District Council supporters can park at the leisure centre or Bridgeway multi-storey car park and will be dropped off at NFU Mutual by Johnsons Coaches.