STRATFORD AC runner Ben Kruze set a course record to win the Broadway Half Marathon men’s race in only his second attempt at trail running.

Stratford runners dominated the half marathon, with five of the top 10 finishers being club members.

As well as Kruze taking six minutes off the course record in the men’s race to finish in 1hr 28mins 35secs, taking victory by a single second, while clubmates Richard Liggatt was third and Matt Burdus-Cook fourth.

Hannah Osborne was also second in the women’s race.

The Broadway event features a marathon and half-marathon. Both the 26.2 mile and 13.1 routes are predominantly run on technical trails with a mixture of gravel, fields and country lanes, each just as challenging. There is more than 220 feet of ascent in the first 3K, at an average gradient of over 11% from the town of Broadway to the tower. 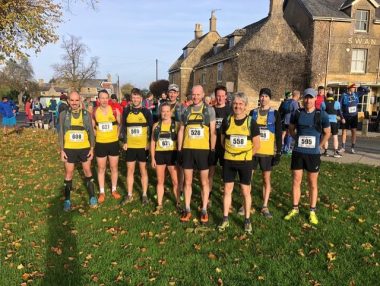 The Stratford AC runners in Broadway.

In a sprint finish, Kruze just edged out Ian Allen of Spa Striders by a second.

“From a personal perspective, this was my second attempt at trail racing,” he said. “The first left a sour taste after taking a wrong turn, causing a rather large detour, a fate, I am afraid to say, that was suffered by a few during this race.

“Fortunately for me, I could settle into a rhythm working alongside a regular competitor on the road racing scene, as it became clear from an early stage that this would end up being a tight finish.

“This proved to be the case when, after navigating the many humps, hollows, woodlands and stiles, we approached the finishing straight side by side. I am now very grateful for the invite to delve into the world of track running this year, as fortunately my final sprint led to a one second victory and first place.

“Having only been a member of Stratford Athletics Club for just over a year now, it still amazes me how supportive all are of one another and it makes events like these incredibly rewarding for runners of all ages and abilities who take part. Onwards and upwards for the SAC team!’

Kruze also managed to edge out fellow club member Liggatt, who showed his continuing improving form and breadth of running skills by taking 3rd place in a time of 01:38:11.

Liggatt modestly put his success down, in part, to his knowledge of the course.

“It was great to get on the podium, this is the fourth time I’ve run this race and I’ve improved my finishing position each time,” he said.

“Knowing the route can be a big advantage and it certainly helped me out this year. I was trying to save energy for the slippery section towards the end but it was much drier this year than previously so I was able to significantly improve my time”

Burdus-Cook finished in fourth place (1:38.4), in part due to the fact that he took a wrong turn, adding approximately 1k to his distance.

“It was a bit of a poor showing from me after I ran an extra km due to getting lost and if anything, the event affirms why I am best sticking to running in circles, or at least on routes with more marshals and/or bigger direction arrows,” he said.

“I did drag the fourthh place runner off course with me, which may have helped Richard’s overall campaign but that shouldn’t take anything away from his well-deserved third place.”

Jamie Chorley (7th) and Seth Turner (9th) adding to the club success on the day.

In fact all 10 half marathon runners were comfortably in the top third of the field of 131 runners, with Adrian Mason (15th), Peter Sugden (22nd), John Raby (28th) and Richard Dobedoe (39th) completing a strong showing for the club.

In the women’s race, Osborne secured a magnificent second place in a time of 1hr 57mins 51secs, showing her continued strong form across a wide range of distances and disciplines.

Osborne had a truly competitive battle with the winner Claire Davidson of Spa Striders, who eventually prevailed with a time of 1:56:48, winning by just 63 seconds.

The lead changed several times, with Osborne reporting that she was ahead up until the three-mile mark. The marshals were telling her that she was first, which she frankly didn’t believe. Davidson passed her on a downhill at four miles but Osborne then overtook Davidson, who has won this race previously, on an uphill, hanging on until the eight-mile mark before eventually being overtaken.

Stratford’s Susan Hunt and Stuart Griffiths were two of 89 competitors taking on the full marathon. Griffiths crossed the line in 5:13:00 and Hunt, in her 34th marathon and a mere three weeks after completing the York marathon, finished in a very respectable 5:29:55.

The first female finisher was Alison Carr of Pershore Plumb Plodders finishing in 4:09:39. First in the men’s event was Daniel Weller (club unknown) finishing in 3:15:37.