While the elite races were taking place on a closed-loop biosecure course in St James’s Park, people from 109 countries set out to make history in the world’s largest event of its kind.

The 40th race in the London Marathon’s history will live long in the memory of thousands of UK runners, as they battled Storm Alex’s high winds and heavy rain to complete their own socially-distanced 26.2 miles in the allotted 24-hour time frame.

Kate Sergent raised more than £1,000 for Stratford Foodbank – a charity close to her heart which has seen its service called upon more since the pandemic and lockdown. 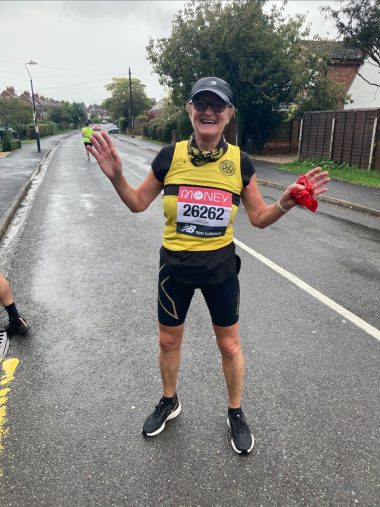 Kate ran from Birmingham to Stratford along the towpath and said: “Having grown up in Birmingham I decided to go back to my roots and start from close to my old Birmingham home and then run to my current home in Stratford.

“It felt more like a cross country run with floods and mud galore.”

Friends from the club and family joined her along the way. At the end she remarked: “I absolutely loved every minute and it made me realise what a great club we are part of!

“I was pleased with my official time of 5.06.08 as I know it would have been better in better conditions!”

Andrew Cox started running marathons for charity after losing his mum to cancer. He said: “October 4 would have been her 73rd birthday so it gave the day a sense of occasion.

“The first 13.1 miles were run on my own in just under 1:28. On the second half, I was very kindly joined by fellow SAC member Seth Turner who managed to keep me on a 1:30 half pace with his words of encouragement and support.

“At 5km out I realised I had a shot at a sub-three-hour time. As each kilometre passed, we kept ticking them off one by one, digging deep and I managed to finish in the village in a huge personal best of 2:58:53.” 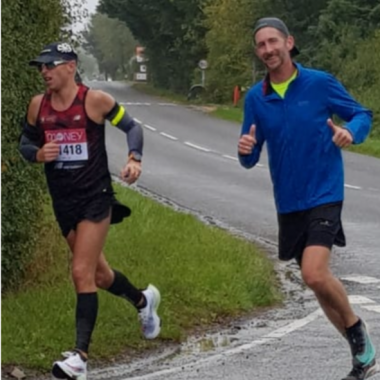 Nic Reynolds had a place in the London Marathon but, after suffering injuries which stopped her from training, she decided to walk the 26.2 miles for Warwickshire and Northamptonshire Air Ambulance and raised more than £500.

She said: “I had a great day despite the weather. I set out at 7am and it rained most of the day apart from a brief spell of sunshine.

“I finished in 7.38.11 – not a personal best in terms of marathons – but I had fun and was grateful to the friends who joined me.” 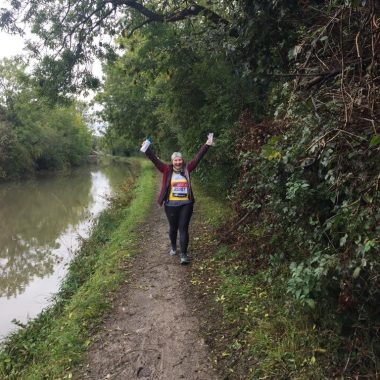 Annie Threadgill and Kate Duke signed up for the Isle of Wight Marathon to raise money for a good cause they are both very involved with – the Robert Dover’s Cotswold Olimpick Games – a four-century-old annual festival event in Chipping Campden on the first Friday after Whitsun in May or June.

It relies on fund-raising and donations each year and there is a fantastic team of volunteers who make it all happen. This was their chance to boost the coffers and help bring it back next year when, hopefully, crowds are allowed to gather on Dover’s Hill once again.

With a combined effort from the local community, games followers and a generous shirt sponsorship from the Berkley Care Group which operates Leycester House in Warwick, they have so far been able to raise more than £2,700 towards next year’s games – which cost £25,000 to stage.

Annie chose the Isle of Wight. It is known affectionately as ‘The Sunshine Island’ because of the number of clear days it enjoys each year.

However, she said: “I cannot remember a more stubbornly awful day, with heavy rain being driven into our faces by 60mph winds!”

They completed the Isle of Wight Marathon along with fellow Stratford AC stalwarts Karl Harris, Emily Adams and Cara Reynolds. Their times were also submitted for the Virtual London Marathon. 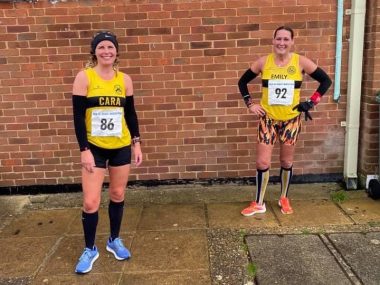 Host club Ryde Harriers first staged the IOW Marathon in 1957 – 24 years before the London Marathon came on the scene – making it the longest running marathon in the UK and 25th oldest in the world.

This year they were keen to keep the unbroken sequence intact but with Covid guidelines strictly adhered to. With all of the Covid-19 restrictions in place, it was a very different race this year with the start having to be socially-distanced.

Having jumped through a variety of health and safety hoops to make it happen, organisers of the 64th Isle of Wight Marathon were delighted it went ahead as planned, with a new course record to show for it, despite the appalling weather.

Cara Reynolds and Emily ran together with both recording a time of 3:51.41 to finish in 56th and 57th place respectively.

They were the eighth and ninth females to finish and third and fourth in their age category.