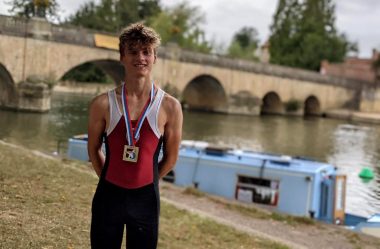 Charles Happel with his medal after the Wallingford Long Distance Sculls.

“It was a very successful day for the J16 squad beating so many competitors from top Thames rowing clubs,” said J16 coach Sam Hill.

In the first division of the J17/18, Stratford had three crews, two girls’ quads and a boys’ double. The first girls’ quad of Freya Watts, Ruby Howells, Amelie Sartain and Fleur Griffiths steered the perfect line to finish in third place, behind two crews from Lady Eleanor Holles School, some of which were fresh from their win at Henley Royal Regatt.

The second quad of Honour Keil, Bella Chappelhow, Grace Beason (racing up an age group) and Lucy Browne had been hit by illness and a late substitution ,but the girls finished in seventh place.

The boys’ double of Tomi Wilcock and Will Beattie took third place behind two strong doubles from Pangbourne College and Westminster School respectively.

In the second division, Stratford Boat Club had a girls’ double and three boys’ singles.

Watts and Griffiths teamed up again in the girls’ double and although the previous quad race had taken the energy out of their legs they still put in a very respectable performance to finish in fifth place.

The boys’ singles of Beattie, Wilcock and Toby Sartain all raced hard in the J17 category.

Beattie was top of the bunch finishing in second place, after a tussle with Wilcock coming into the finish. Wilcock finished in third and Sartain 17th out of a large field.

“It was a good test for them all against strong opposition from the best schools and clubs around the country,” said Abi Terry, J17/18 coach.