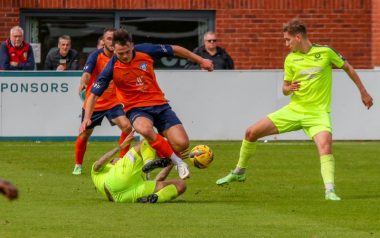 A WILL Grocott penalty before half-time earned Stratford Town a 1-0 win over Bedford Town to round off pre-season in fine fashion.

The Bards begin their Southern League Premier Central campaign on Saturday away at Coalville Town, and head to Leicestershire after a fifth warm-up win last weekend.

Bedford, from the league below, included former Peterborough United and Brighton and Hove Albion hitman Craig Mackail-Smith, now 37, at the Arden Garages Stadium.

Fortunately for Town, the Eagles forward was unable to replicate his goalscoring exploits, with Grocott instead stealing the headlines after sweeping home from the spot following a Bedford handball in the 40th minute.

While Stratford’s goalscorer went close to extending the lead in the second half, it ended 1-0, providing boss Paul Davis another reassuring display to look back on before the real action commences this week.

RYAN Palmer and Levi Steele netted in a 2-1 win at home to Shortwood United to give FC Stratford the perfect start to life in the Hellenic League Division One.

Following the shake-up of the non-League pyramid this summer, Stratford may have been forgiven for needing time to adjust to life at Step Six, but they had no such problems.

“Our approach play was very good in terms of decision making and quality of pass,” said Blues manager Danny Janes.

“We built our attacks from a defensive third, creating time on the ball and then hitting the forward pass once our forward players made their movement.

“We created so many chances, we should have been out of sight at half-time.”