CLAVERDON RFC cruised to a sixth win of the season, after an attacking second-half performance sealed a 49-7 home victory against Upton-On-Severn in front of a large home crowd.

Claverdon sit second in Midlands Four West (South), six points behind Old Wheatleyans who have played a game more, before they entertain Coventrians at Ossetts Hole Lane on Saturday (Nov 27).

The hosts got off to a flying start against Upton, after George Redwood collected a kick in behind the visitors defence and offloaded for centre Sam Turrell to score under the posts. Chris Calcott slotted the conversion for a 7-0 lead. 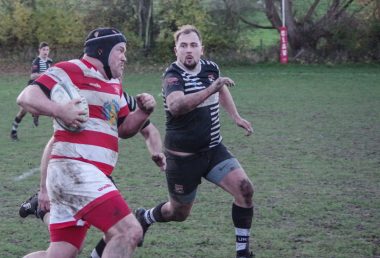 A deternined Ali Norman breask through the Upton line. Picture by Will Barnes.

Upton responded well and spent a much of the remainder of the first half in Claverdon territory. Only some stoic defence, typified by two crucial turnovers at the breakdown by flanker Charlie Byrd, kept Upton from getting on the scoreboard.

A couple of penalties conceded by Upton finally gave Claverdon the opportunity to clear their lines and release the pressure. They then clinically made the most of the new-found momentum to score on the stroke of half-time. An accurate cross-field kick from Will Jackson to Redwood was passed back inside to James Barton, who did well to beat the covering defenders and score. 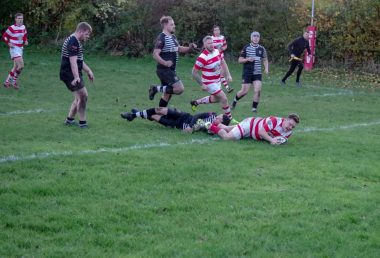 Will Jackson drops over for another Claverdon try against Upton. Picture by Will Barnes.

The 14-0 half-time scoreline perhaps flattered the hosts, and Upton came out in the second half with added impetus. Some good work around the breakdown led to Upton powering over from short range to score.

However, with centre Calcott keeping the scoreboard ticking over from the kicking tee, Claverdon extended their lead. 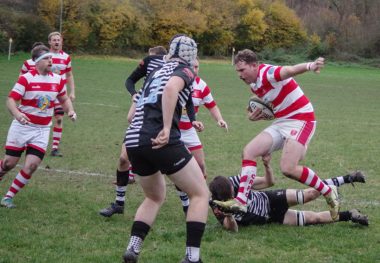 Claverdon’s Chris Calcott charges through. Picture by Will Barnes.

The next breakthrough came as a good line from centre Max Oxton-Morris broke the Upton defence. Despite Oxton-Morris being hauled down short of the try line, the damage was done, and quick hands fed second row Paul Stacey who powered over in the corner.

A confident Claverdon then increased the tempo of their game, with expansive play leading to three further tries. 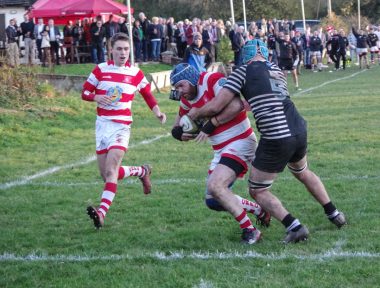 Paul Stacey scores another try for Claverdon. Picture by Will Barnes.

The first was claimed by fly-half Jackson, who scythed through the Upton defence following a quick tap from Ben Husthwaite. A further score was added shortly after as prop Jack Barwell capitalised on strong running by Marc Spencer to touch down.

The final try of the game came after a rampaging run by Ali Norman created space out wide. This time Oxton-Morris wasn’t to be denied, as he collected the ball and bounced off the covering defenders to score. Calcott kicked the resulting conversion to take his tally to 19 points for the match.