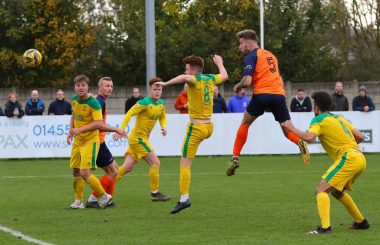 OUTGOING defender George Heaven says he has felt privileged to have been part of the current Stratford Town side, following his exit to League of Ireland First Division side Cork City.

The 21-year-old had been part of the Town set-up since September 2019 after arriving from Leicester City’s development squad – making 13 appearances in all and scoring his one and only goal in the 2-1 defeat to Hitchin Town last October.

The move to Ireland is an opportunity that may well have never come about at all, considering Heaven’s long-term lay-off following only his second game for the club against Leiston in October 2019 – one which ruled him out for the best part of five months.

Having gained his first taste of first team football in Warwickshire, the central defender says he is grateful for the time he has spent at Knights Lane, which has now allowed him to pursue a full-time professional career in the Irish second division.

“It’s been a pleasure to have been a part of Stratford Town,” said the Leicester native.

“There are a lot of genuinely nice people at the club, I’ve really enjoyed my time with Stratford and want to thank the management, the players and of course the fans.

“I wish the team all the best in the future and will definitely be coming back to see some old faces when I get the chance.

“I think it is a very good move for me from a footballing point of view.

“It sounds like a very good opportunity for me and I was very pleased to get it over the line. I’ve heard a lot of good things about Cork as a club and, once it was clear that there was interest, I was very keen to join.”

The move is yet another example of the reputation Stratford have built in recent years in elevating players to a higher playing level – something which chairman Jed McCrory was keen to point to.

“It’s great to see another player from Stratford Town follow in the footsteps of Albi Stendi and Wilson Carvalho into professional football,” he said – in reference to the duo now at Yeovil Town and Hampton & Richmond Borough respectively.

“George has been fantastic during his time with us. On behalf of the club I’d like to wish George all the best with his move to Cork City and for the rest of his career.”