Davis delighted as Bards get back to winning ways

The Bards have struggled to shake off their FA Cup hangover, and had lost 3-0 at home to Rushall Olympic on Saturday.

But they bounced back in style as goals from Will Grocott and Owen James sealed the points at The Lamb.

With no game at the weekend, the Bards are back in action next Tuesday at home to Nuneaton Borough in the first of three games in a row at the Arden Garages Stadium.

Against Tamworth, former Lambs player Mike Taylor proved a threat in Stratford’s attack, forcing keeper Jas Singh into a one-handed save in the first half. 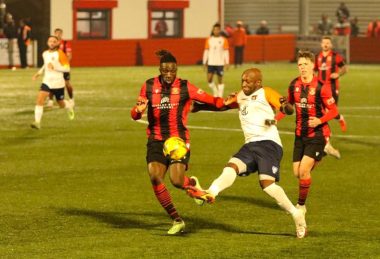 At the other end, Shaq McDonald scooped over but only the woodwork denied the Lambs striker early in the second half.

Stratford made the most of the reprieve to go ahead on 57 minutes, with Taylor leading the counter-attack and teeing up Grocott to curl home his shot. 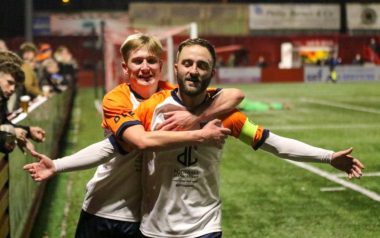 Wil Grocott is congratulated after his goal. Picture by Steve Wood & Paul Grant/STFC

After keeper Liam O’Brien kept out Alex Jones as the Lambs pressed, the Bards had a second goal eight minutes from time when James tapped home. 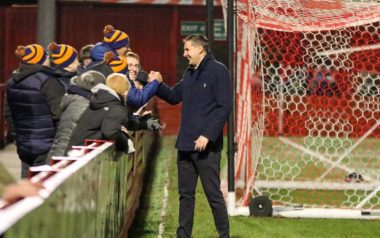 Last weekend, Stratford were without keymen Jimmy Fry, Joe Magunda and Jordan Williams and then had Kynan Issac sent off as high-fliers Rushall took the points.

The Pics led 2-0 at half-time after Callum Coyle’s deflected effort deceived O’Brien on 33 minutes before Isaac was then red-carded for a clumsy challenge on Danny Glover three minutes later. It got worse when the free-kick from Tyler Lyttle made it 2-0.

A counter-attack just past the hour-mark ended with Coyle teeing up Glover to stroke home for 3-0.