A record crowd of 2,800 packed the Arden Garages Stadium to watch Will Grocott put Stratford in dreamland with an opening goal against League One Strewsbury Town in their first-ever appearance in the FA Cup.

The Shrews hit back to win 5-1 but the home players gave their all and head coach Davis stressed the Bards could feel proud of their endeavours.

He added that the season is far from finished and now they need to adjust their sights on charging up the table to get into the Southern League Premier Central play-off race. And he hopes a big chunk of those attending last Sunday will make a return trip to cheer them on.

“I thought it was a brilliant atmosphere,” Davis told the club’s social media.

“I had to dodge people when I was coming into the ground at 12.30. There were 50-60 people walking down the road. Inside the ground, it was a sea of blue and orange – we must have sold out hats and scarves. It was really pleasing.

“I would just say to people to come back, come back and support us in the league because I can assure you we will be trying our best to get more days like Sunday, and hopefully we can have one of those in the play-offs at the end of the season.”

After the scheduled trip to Hednesford Town was postponed on Tuesday, the Bards return to action away to Alvechurch on Saturday before heading to Barwell on Tuesday and then returning to the Arden Garages Stadium a week on Saturday against Rushall Olympic.

The Bards are looking to regain the form which put them up among the early-season promotion contenders but they have lost four and won two of the last six league games. Now there is no Cup distraction but Davis wants his side to build on the positive from the display against the Shrews. 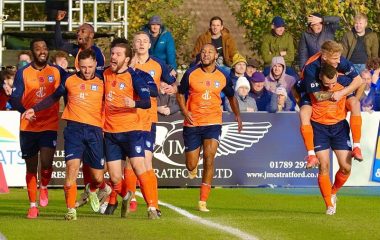 Stratford had the perfect start when they took the lead after five minutes with a superbly crafted free-kick move. Jaanai Gordon was fouled wide on the left and as Town players flooded the penalty area, skipper Grocott pulled the free-kick to Ash Sammons on the edge of the box and then took his reverse pass to drill low past keeper Harry Burgoyne. 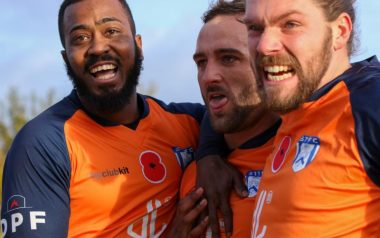 Shrewsbury replied on 25 minutes when Ryan Bowman nodded home Nathanael Ogbeta’s left-wing cross to level and Bowman put them ahead 10 minutes into the second half from Ogbeta’s floated far-post cross. 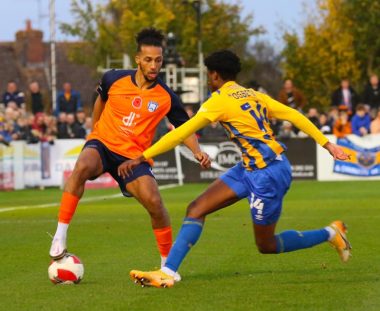 Four minutes later Luke Leahy smashed home from 25 yards into the top corner of the net for 3-1 and another blistering strike made it four as Elliott Bennett fired a 20-yard free-kick shortly afterwards. Sub Tom Bloxham added a fifth in stoppage time.

“I am very proud of what we’ve achieved,” said Davis. “Just a mad eight minutes at the start of the second half have sent us out of the competition. 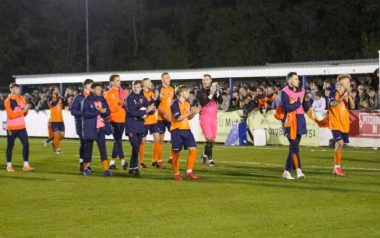 Town players salute the crowd at the end of their FA Cup adventure. Picture by Steve Wood & Paul Grant/STFC.

“It was very pleasing to go 1-0 up and I know people says you can score too early but I felt we managed the game for the next half an hour or so. I felt we could have gone in at half-time in front.

“At half-time the message was that we are still in the game, that we had done well in the first 45 minutes and that had given us a platform to go on and win the game. Those mad eight minutes cost us.”