Enoch treble in vain for Bards 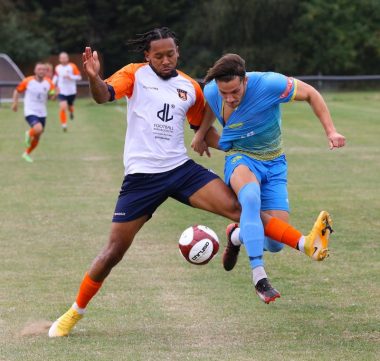 Jaanai Gordon, left, battles for the ball with a Carlton Town defender. Pictures by Paul Grant and Steve Wood.

AN Enoch Andoh hat-trick was not enough to prevent Stratford Town suffering Southern League Cup heartache after being dumped out in a 5-3 thriller against Cirencester Town on Tuesday night.

On a night when a Jack Turner injury left the travelling Bards with ten men after making all of their permitted substitutes, it was very much a contrast to the events of last weekend when Daniel Vann, Jaanai Gordon and Will Grocott ensured Stratford’s FA Cup progression with a 3-1 victory at Carlton Town.

Cirencester forward Levi Irving gave his side an early advantage on 18 minutes at the Corinium Stadium, punishing the Bards for poor defending from a corner kick.

Andoh’s leveller just after the half-hour mark was then wiped out instantly by another Irving strike that sent Cirencester into the interval 2-1 ahead. Irving then completed his hat-trick three minutes into the second half following a counter-attack, though Andoh quickly notched his second of the game with an untidy finish seconds later.

The frantic rate of scoring continued just before the hour mark as Benjamin Whitehead made it four for the hosts, before Ross Gabriel got in on the scoring action on 64 minutes.

And though Andoh restored a glimmer of hope 12 minutes from time with a close-range finish, it was too little too late for Paul Davis’ men to rescue the tie. 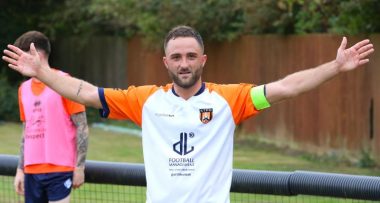 As a result of Stratford’s FA Cup first qualifying round win, a home meeting with Southern League Premier Central rivals Nuneaton Borough now awaits on September 18 – but not before a league meeting with Stourbridge at the Arden Garages Stadium on Tuesday.

The much-travelled 28-year-old had only joined Southern Premier Division South side Hendon in August. He had originally signed for Stratford in July 2020 from league rivals Banbury United.