THIS year has been a challenging one for everyone, including Stratford Boat Club, but traditions and customs continue despite the pandemic.

The club took time to recognise ‘Personalities of the Year’ – awards voted on by all the coaches of the club.

The pots for the awards were donated by Felix Badcock’s (immediate past president) wife Jane from the vast collection Felix had amassed over many years of competitive rowing, which gave the awards special provenance and significance.

The Junior Felix Award was presented to Khloe Curnock a few days before she went to Imperial College London to start her university studies.

Khloe’s citation from the coaches read: “Khloe took joining her squad a year later than others in her stride, rapidly catching up her skill development.

“She stands out as a junior member showing a true club ethos. Always happy to prioritise her time for others and give support, advice and a smiling face to members of all ages, she is genuinely valued by seniors and masters.”

She shone as a support coach to the 2019 weekend Learn to Row programme, in which she was involved in coaching potential competition rowers who, as existing sportsmen and women, recognised and were motivated by Khloe’s passion for her sport and the importance of passing this on to others.

She always acts as a role model to younger athletes, encouraging and helping where needed. Much of her help is not always noticed, for example often being at the club for clean-ups after flooding, other volunteering or more recently cleaning facilities before use following Covid-19.

She is also a good ambassador for Stratford – keen to row as a visitor at other clubs when away from home – thereby ensuring a positive reputation for Stratford is maintained outside the club’s usual sphere.

The Senior Felix Award for 2020 was given not just for this year’s hard work and effort, but for continuous work to make the club as best as it can be over the years.

The winner of the 2020 Senior Felix Award was Oli Smith, Captain of Boats. 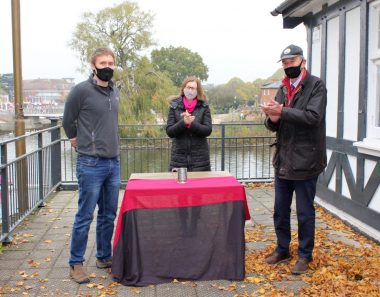 Dawson Curnock, Stratford Boat Club’s chairman, said: “I could go on forever but, in a nutshell, Oli is the ‘go-to’ person at the club and we thank him for that.

“The club and its membership thank him for all the work he has done and continues to do and I personally thank him for the help and support he has given me over the last three years.”

One of Oli’s recent Herculean tasks has been to interpret and implement the Government’s and British Rowing’s advice and rules concerning Covid-19 – making them relevant to Stratford Boat Club’s local conditions and structure.

Oli’s careful implementation and skilful adaptation led to British Rowing, the sport’s governing body, holding Stratford Boat Club as an exemplar for how Covid protocols should be introduced.

At the weekend, a crew from British Rowing came to film and interview key members of Stratford Boat Club on Covid-19 protocols.

More good news from the club is that Katie Wellstead, who has just gone into her first year at St Edmund Hall, University of Oxford, has been selected to join the Oxford University Boat Club women’s lightweight squad.

She is one of a squad of 16 who won selection following a large number of rigorous tests on and off the water.

Dr Graham Collier, Katie’s former coach, said: “We all take this opportunity in offering Katie our warmest congratulations and thank her for her contribution to Stratford Boat Club’s highly-respected profile in the rowing world.”