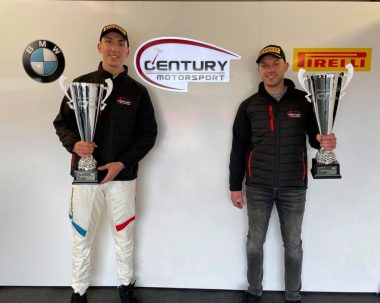 From left: Gus Burton and Will Burns secured their first-ever British GT win last time out.

A DREAM opening weekend for Century Motorsport in the British GT Championship went beyond the wildest expectations of anyone linked to the Fenny Compton outfit – says team manager Nathan Freke.

With representation in the GT4 class from the pairings of Gus Burton and Will Burns – who stormed to victory at Brands Hatch – and second-placed Andrew Gordon-Colebrooke and Chris Salkeld, Century sent out the perfect early warning shot to their rivals of the title credentials within the team.

For Freke, who admits that he was confident of a positive result going into round one, the end result defied description.

“After pre-season testing, we knew that we had a great chance of success this weekend, and it certainly didn’t disappoint,” he said.

“To come away with a one-two result is just amazing and is a true reflection of the effort everyone has put in the off-season.

“The weekend was a joy to be a part of and its shaping up to be a very competitive year for us.”

A qualifying win for Burton and Burns in the form of a fastest lap time of 3:03.874 was enough to earn the duo pole position on the GT4 grid, foreshadowing what was to come for the Century men, while Gordon-Colebrooke and Salkeld came in at a second-and-a-half slower lap time than their teammates in fifth.

After a delay to the race start in Kent, the leaders consolidated their position after the green flag was shown, building a considerable lead that was only hindered by two safety car periods.

Despite falling back into third place, Burns and Burton went about making amends and did so by first overtaking teammates Gordon-Colebrooke and Salkeld, before a puncture late in the race to leaders Charlie Robertson and Mark Sansom meant both pairings jumped up a place on the podium in fortunate circumstances.

As a result of the stroke of good fortune in the final five minutes of the race, Burton and Burns scooped their first-ever Championship win, while Salkeld records his maiden podium place in his debut at this level.

The next appearance for the team will be in the Silverstone 500, held over the weekend of June 26 and 27.