CHARLES Happel led the way for some impressive displays by Stratford-upon-Avon Boat Club’s youngsters at the Henley Long Distance Sculls at the weekend.

J16 Happel produced an excellent display of strong technically excellent sculling over the 3,000m course finishing fourth in a time of 15mins 17.7secs, 40 seconds behind the third-placed boat from Claires Court Schools.

WJ16 coxless quad of Amalia Richardson, Harriett Noyes, Maddie Hall and Kate Richardson again demonstrated they are developing and improving to finish in 14:20.3, only seven seconds behind the successful crew from Wycliffe.

“The girls should be truly proud of themselves,” said J16 coach Steve Marsden.

Stratford’s WJ16 single scullers of Uche Nwachukwa and Grace Beason suffered the worst of the windy conditions but still demonstrated great persistence to complete the 3km course in 18:12.2 and 19:06.2 respectively. 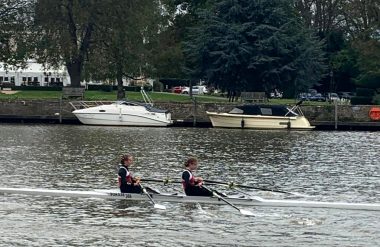 The boys’ double of Tomi Wilcock and Will Beattie were sixth, and Martha Usselmann and Amelie Sartain finished 11th in the girls’ double while Toby Sartain, braving a single in the windy conditions, was 41st racing up an age group.

The Stratford Masters Women also put in a good start to the season.

The Masters C quad came away with a victory over Ross and held off the ex-Olympians for 800m between the island and upper Thames. 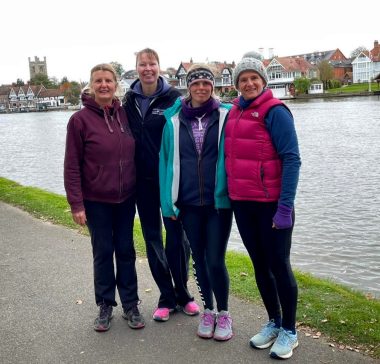