STRATFORD Town were victorious in Tuesday night’s battle of the DCS Stadium after edging out previously unbeaten Stourbridge 2-1 to go second in Southern League Premier Central.

Will Grocott’s 48th-minute opener helped spark the game into life after a goalless opening, with Darryl Knight’s 59th-minute equaliser for Stourbridge proving useless as defender Jordan Williams won it with 20 minutes to play to shatter the Glassboys.

The result sends Town to within a point of the summit and leaders Needham Market – a position that boss Paul Davis and his team are thrilled with.

In a first half of few chances, Ash Sammons set up the best opening when feeding the ball to forward Ken Feyi to draw Stourbridge keeper Charlie Price into an excellent stop at full stretch 20 minutes in.

Williams gave an indication of his threat to the Glassboys’ rearguard when cracking the woodwork with a header from a tight angle, while Jimmy Fry should have done better with an attempt from the edge of the penalty area which was an easy claim for Price.

But, with the quality of play improving, the opening goal followed just three minutes into the second half to spark life into the 388 spectators. 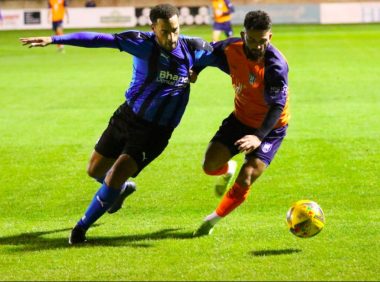 Stratford gratefully accepted the gift that followed from 12 yards, as Grocott duly converted to give the hosts a crucial advantage.

The miss was a costly one, as the visitors drew level just before the hour mark.

Knight’s run towards goal continued without much in the way of opposition and he took advantage of the space that was afforded him to plant the ball in the top corner from 20 yards.

But Town were not to be denied the three points – wrestling back their advantage when Williams thrashed home inside the penalty area after Grocott’s corner was not cleared.

A late George Heaven block proved sacred in protecting the hosts’ slender lead, whilst Landell was denied parity for Stourbridge after his stoppage-time header hit the post and fell into the arms of Ty Belford.

Stratford will be encouraged by their resolve to see off one of the league’s expected front-runners and they now face a different kind of test when making the trip to Hednesford Town on Saturday (3pm).

The Pitmen are winless so far this term with only a solitary point to their name, giving Davis and Co plenty of encouragement to continue their hosts’ misery at Keys Park.