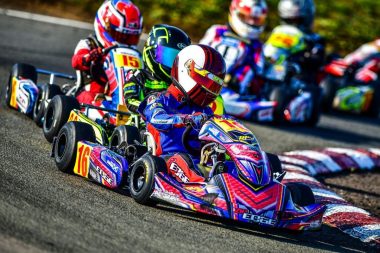 Lucas Blantford in action during the 2020 IKR Shenington Championship. Picture by Stu Stretton.

BUDDING racer Lucas Blantford says he is still having to pinch himself, having learned of Power Maxed Racing’s plan to support him in the long-term.

The 12-year-old, who is a student at Stratford School, is set to compete in the forthcoming British Kart Championship for his first-full campaign with Zip Kart following a breakthrough year in 2020.

Blantford made his debut in karting last year, only appearing in four rounds of the renowned IKR Shenington Championship but excelling to a high enough standard to secure third place overall for the season.

A particular highlight was a full sweep of race victories in one of those rounds, winning all competitive heats and the final race – becoming only the second driver to achieve the feat last season.

Having also announced his participation in the Trent Valley Cup and the Whilton Mill Championship, it promises to be an exciting year for the youngster, not least due to Blantford’s partnership with PMR.

The race-ace will be taken under the wing of the team, with a view to entering him into the Ginetta Junior Championship when he turns 14.

Blantford says he is already looking forward to getting started with Power Maxed Racing, adding: “This is an opportunity of a lifetime and I feel very lucky and privileged to join such a successful race team.

“I follow the British Touring Car Championship with my dad, and still cannot believe this is happening – it really is a dream come true.

“I’m now looking forward to the training I will be given, and intend to work hard to fulfil my dream and the belief PMR have in me.”

Team Manager at PMR, Martin Broadhurst, is of the belief that the only way is up for the young gun, having been impressed by the Blantford’s application on and off the track.

“We are approached by a number of young drivers every year, but Lucas stood out from the moment we first opened conversations,” he said.

“Not only does he have a very obvious natural talent on the track, but he has the drive to succeed off it, and there are very few boys his age who have the wherewithal to look at their future journey and build long term partnerships now, so we’re looking forward to a long and fruitful relationship together.”