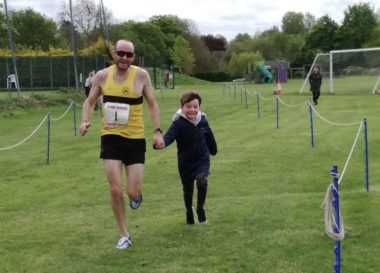 Matt Burdus-Cook was accompanied by his seven-year-old son Noah over the finish line.

Having had to bide time between national lockdowns at the tailend of last year and at the beginning of 2021, racing advocates had been starved of any action until the permittance of racing once again in mid-April, meaning the latest series could once and for all conclude.

And while changes to the format of races meant adapted time trials were used to determine standings, the end result was one to be proud of for all connected to Burdus-Cook and Stratford.

Leading a pack of 27 club members in the final races around Ilmington, the reigning male champion showed his champion quality by winning three out of the five races that he participated in.

To make his afternoon even more impressive, Burdus-Cook also placed in second and third, while picking up a string of personal-best times during the event.

Though the series should have concluded three months prior, as per the normal October to February schedule, there is no doubting that the wait would have been worth it for the Stratford man.

In the M35 category, Adrian Mason followed suit by coming out on top having improved his fitness levels and race times since the beginning of the series, while Andy Cox was champion at M45 level – having won three of the four categories he competed in.

John Butler was relentless in the pursuit of silverware in the M75 races, placing first in all of his final events to win the title for his age group.

And as far as Stratford’s ladies were concerned, there was more success in the form of a F35 category title for Lara Bakewell, who secured her champion status by winning all three of her remaining races on the final day.