Nardone on form, as Panthers misfire against Streetly - The Stratford Observer

Nardone on form, as Panthers misfire against Streetly 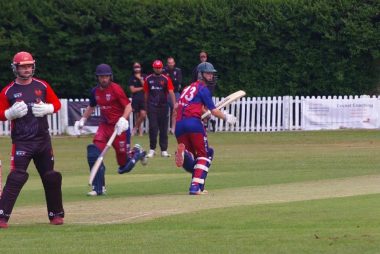 Number 13 Luke Nardone was in fine form for the Panthers.

IN SPITE of a top score from hot-shot Luke Nardone, Warwickshire League Premier Division leaders Stratford-upon-Avon slipped to defeat for the first time this season in an ill-fated trip to Streetly.

Spirits were understandably high going into the Sutton Coldfield away day amongst the Panthers camp, but the resistance that they came up against in the field and from the hosts’ bowlers was one that Dexter Purser’s side simply could not contend with.

With Streetly smashing 242 runs for seven wickets conceded after electing to bat first, the Stratford reply was ended in the 39th over, as the visitors lost out by 53 runs.

Though the league table still makes for good viewing for the Panthers faithful, the lead over Walmley has been cut to just nine points following their rivals’ four-wicket win over Solihull Municipal last weekend.

Streetly failed to ever really get going until a fourth-wicket partnership of 65 got the home side on the right path – courtesy of Imran Qadir (44) and Akbar Ahmed (37).

From a Stratford perspective, James Urquhart (2-47) and Mike Brown (3-60) were the men to scoop up the majority of the wickets, on a afternoon when the hosts’ big-hitting middle order ensured a tricky day for the Panthers bowling line-up.

Mateen Khan (62, no) played a leading role to ensure his side saw out the innings to its conclusion, joined by tailender Junaid Khan (18, no) to post a respectable final tally.

The reply from Stratford was anything but convincing, however, as Waqar Dad (3-25) struck three times in the opening five overs to leave the visitors in the mire at 5-4.

A stand of 60 between Nick Pepper (24) and Nardone (70, lbw) helped drag the travelling side back on their feet, before the latter combined with Josh Colwell (33, lbw) for 67 runs to give Stratford an outside chance.

But, for the exception of Tom Grundy’s (35) late scoring run, the Panthers lacked the extra bite needed to bring themselves into serious contention – leading to the premature end of the innings.

With ninth-placed Solihull Municipal next up at Swans Nest Lane on Saturday, Stratford have the chance to get back on track against the league strugglers – who are winless in two games – and attempt to reinforce their position as the frontrunners for the title.