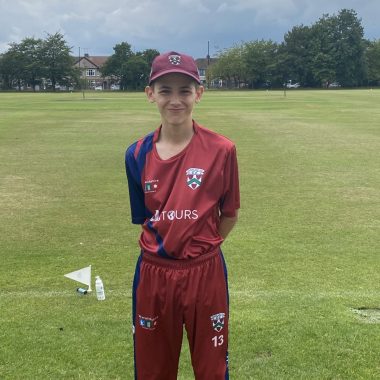 Sammy Leaver did not make it to the crease on Saturday, but the 14-year-old at least chipped in with four overs bowled on his second appearance for the first team.

THERE WAS frustration for Stratford-upon-Avon and Dexter Purser last weekend, after the Panthers skipper’s unbeaten 155 still proved insufficient for victory in a winning draw at Barby.

The Warwickshire League Premier Division challengers, second in the table behind leaders Walmley, looked a class act at Longdown Lane, declaring on 256-3 with two overs to spare after Purser and Nick Pepper (59 not out) stole the show.

But while Stratford’s bowlers, notably Mike Brown (4-38), heaped the pressure on Barby the home side held on to finish on 154-8.

Purser – scorer of 18 boundaries and three sixes – was unable to strike up a truly significant partnership with any of his teammates initially, with fellow opener Gareth Langman (8) pitching in for a stand of 47 runs.

The arrival of number five batter Pepper at the crease, however, provided both the consistency and the runs that Purser needed to hit the heights.

After a stand of 175 runs between their two talismen, Stratford decided to call it a day on their batting effort.

After both openers fell cheaply, Barby’s best spell of the afternoon came through Alex Watson (20) and Dineth Thimodya (34), without threatening the visitors’ target.

With Barby’s attentions turning to preserving the innings as wickets regularly fell, Brown and Co. gave their all to secure an outright success for Stratford but tailenders Craig Scott (21no) and Will Sinclair (18no) proved stubborn customers and the innings ended on 154-8.