Salkeld revs up for big GT chance - The Stratford Observer 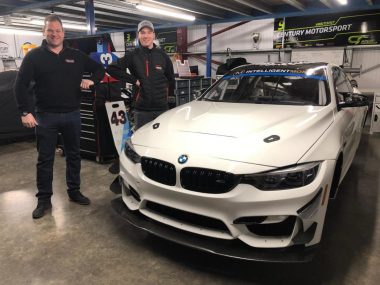 CHRIS Salkeld is hoping to become the next British GT star to be produced by Century Motorsport after signing terms with the Fenny Compton-based outfit for the 2021 season.

The 29-year-old has had a remarkable rise in recent years – having only been involved in racing for the previous three years – scooping the Ginetta G40 Cup at the first time of asking with a scintillating record of five wins, five pole positions and 13 podium appearances during his second campaign.

The Leeds native backed up that success by finishing runner-up to veteran driver Colin White in the Pro-Am class in the Ginetta SuperCup last November – a competition in which he made his debut for Century Motorsport.

With the team also signing up Gus Burton for this year’s British GT Championship, Salkeld is confident the duo can enjoy a successful season racing in the BMW M4 GT4.

“After only two weekends with the team last year, I knew instantly it was the right decision and I cannot wait to get started in the upcoming season.

“I was instantly blown away by Century’s professionalism, attention to detail and knowledge of the cars they run, both in British GT and elsewhere.

“It’s an honour to be a part of such a great team with an incredible legacy, along with working closely with one of the world’s biggest car manufacturers in BMW.”

With the team last tasting British GT success in 2018, Century’s newest recruit admits he is fully aware of how big the challenge ahead will be, but remains equally optimistic about his chances of progressing as a driver and helping his new employers in the process.

“Century have an incredible history of developing drivers into top GT stars and I’m excited about what our future holds together,” Salkeld added.

“We have to be pragmatic with our expectations this year as we move into the highest category of GT racing the UK has to offer in only three short years of motor racing.

“But, after a tricky 2020, I’ve got my fire back and will be working harder than I ever have to get back on that top step.”