Gravelsons, competing in the senior girls heptathlon for Gloucestershire, finished with a personal best score of 3,055 points, finishing 33rd overall while Farrow competed in the senior boys decathlon for Warwickshire, ending in 20th place overall with a total score of 5,221.

Many past winners of the event have gone on to further athletics success: Kelly Sotherton, Jazmin Sawyers, Katerina Johnson-Thompson, Dean Macey, Meghan Beasley to name a few and this year was the tenth anniversary of when the club’s Imogen Green won the senior girls’ title.

On a glorious sunny first day, Gravelsons had an early start and negotiated the 100 metres hurdles well in a time of 18.83 seconds. She then moved to the high jump, clearing each height up to and including 1.38m at the first time of asking.

A later start for Farrow gave him plenty of time to warm up, enabling a strong 100m performance in a time of 12.03s. In the next two events he improved his long jump PB by 9cm to 6.17m and threw over 10m in the shot put.

Then it was back to the track for the last event of day one.

In the 200m Gravelsons’ had the ideal inside lane draw winning her heat in a time of 28.48s. Farrow returned a good performance of 56.96s in the 400m, ending a good day’s work for both competitors.

Day two saw a very early start for Farrow which sharpened his mind for the 110m hurdles where he improved his personal best by  1.5 seconds to 18.07s despite clattering the final hurdle.

Gravelsons faced her nemesis event – the long jump – and even though she found a consistent rhythm, she only managed 3.94m. 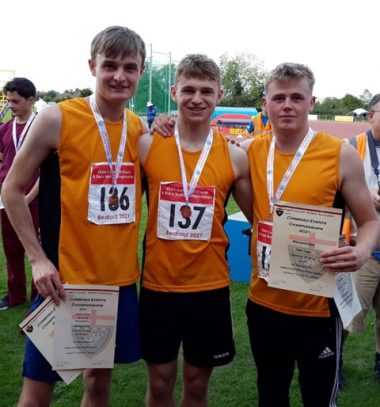 Adam Farrow (centre) as part of the Warwickshire medal-winning team.

Meanwhile Farrow grappled with the discus, never really getting it under control and throwing just over 25m. He then followed up with the pole vault. This is a tricky event and the club does not have any pole vault facilities, so he has been training at Nuneaton and this dedication paid off with him comfortably equalling his personal best of 2.90m.

Gravelsons showed improved technique in the javelin, managing 16.90m, just short of her personal best. However, in the 800m she ran a perfect race, finishing with a huge personal best of 2:31.28. This ensured that she finished personal best score of 3,055, finishing 33rd overall.

In his last two events, Farrow put on a master class of javelin throwing with a distance of 46.04m, the fifth best throw in the competition, he then knocked five seconds off his PB time in the 1500m, with a time of 5:00.95.

His total score of 5,221 was an improvement of 470pts from the Regional Final. He left with a smile on his face, well satisfied with his two days work.

After UK top 10 finishes in the National School Games Final and the Super Series Grand Finale, triathlete Charly Marshall (16) did it again in her last big race of the season.

As part of Great Britain’s youth selection of 18, she completed to claim her third ninth position in a row at her first ‘Enduro’ triathlon.

The ‘Enduro’ is a triathlon with swim, bike, run and then dive straight back in and do it again! With three more transitions and the added jeopardy of being eliminated if you fall 90 seconds behind the leader over the event, she considered this her toughest challenge yet. 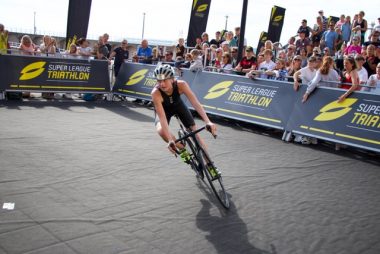 Racing just after the seniors and inspired by having just watched her Olympic heroes Jess Learmonth and Georgia Taylor-Brown duel it out for the win, she took to the same course and topped off the season with consistency and confidence on the most technically challenging of formats.

Charly commented on how incredible the experience had been in the sunshine of St Helier, on an elite course racing in front of crowds and grandstands and meeting her heroes.  She took the opportunity to meet GB elites, Vicky Holland and Non Stanford during their warm down and managed to get some advice and tips for her race.

Next for Charly is the Stratford Triathlon where she will race amongst the seniors, before her off-season of cross country and winter training.