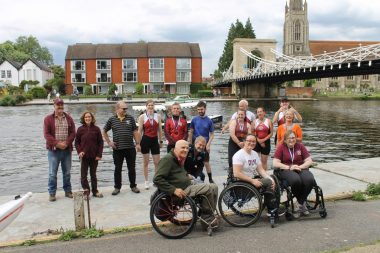 Stratford’s adaptive squad almost made it a clean sweep at the weekend.

IT WAS a weekend to remember for Stratford-upon-Avon Boat Club’s adaptive squad, after making a splash on their return to action with three wins out of four event entries at the Marlow Town Regatta.

In the ladies’ doubles race, Hattie Throssell came out on top, while Lissie Simpson shone on her debut to secure the duo’s victory with an impressive win by two lengths against opposition from Guildford.

Meanwhile, Ian Ward competed in and won the tightest race of the day for rowers with learning difficulties, edging out two Marlow crews by only half-a-length.

And it was almost a perfect afternoon for the club, after Dan Godefroy missed out by a length in his race against a Marlow boat to the finish line.

The adaptive squad are on course to next be in action in Maidenhead in August, where a number of new recruits are set to debut for the club. 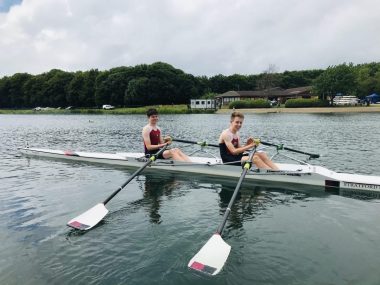 J14 members Jamie Wilcock and Will Dalrymple-Baker warm-up for their time-trial doubles event.

Elsewhere, there was plenty of Stratford representation at the Peterborough Junior Championships.

A number of time-trials greeted the J15 squad, with the quad team Grace Beason, Ruby Brooker-Collins, Imogen Hill and Uche Nwachukwa achieving a place in and eventually reigning supreme in the C final with a finishing time of 4:50.

There was then a further medal in store for Nwachukwa, who took silver in the Plate final after crossing the line in 5:10.

Charles Happel qualified for the C final and picked up a bronze medal for his efforts as the final J15 contestant from Stratford, finishing in 5:04.

Next up was the club’s J14 side, who picked up time-trial medals through Jamie Wilcock, who took silver in the C final, and Will Dalrymple-Baker, a bronze medalist in the B final.

The pair then combined in the open time trial event, qualifying for the C final which they scooped a gold medal in – courtesy of a four minute and 27 seconds row to the finishing line.

It was the turn of the girls in the next round of indiviudal time trial events, with Aimee Appleton winning the B final and Lucy Sartain placing fourth in the A final.

Sartain was back in action as a pairing alongside Molly Vondrak in the doubles time trial A final, finishing in fourth behind the second place duo of Scarlett Richardson and Nancy Davis.

Completing the set, the quad team of Eloise Cooper, Esmerelda Elfwood, Harriet Froom and Jessica Long fought off stern competition to pick up bronze medals in their B final – making it nine podium places in all for Stratford’s rowers at the Championships.