STRATFORD Town’s bid to clinch a fourth successive Southern Premier Central home win was thwarted by Hitchin Town who secured an impressive 2-1 victory at the Arden Garages Stadium on Saturday.

With home favourite Harry White returning to Stratford and two other quality debutants in the squad in the shape of Rhys Sharpe and Will Dawes, the majority of the 462 crowd were hopeful of a fourth win of the campaign for Paul Davis’ side but the visitors had not read the script.

After the previous weekend’s defeat at Hednesford Town, Sam Muggleton was restored at left wing-back and Sharpe came in on the right. Ash Sammons returned to midfield and White started in place of Ken Feyi.

However, the opening minute of the game provided a glimpse into what was to turn into a day to forget for Stratford who nearly conceded a goal and player advantage in the first seconds of the match.

Muggleton completely missed the simplest of through balls, allowing Alexander Marsh to stride into the Town area on the right.

As Marsh went to round Ty Belford, the keeper’s mistimed diving challenge brought the Hitchin winger down at the cost of a penalty, with players and fans left to ponder whether Belford would see red.

Referee Neil Pratt decided to not even issue a yellow card and Stratford’s escape was complete when Layne Eadie’s shot was struck hard and low but the superb Belford dived to parry the ball to safety.

However, Stratford did not wake from their slumber and fell behind on 12 minutes when the hosts were undone down the left again and Luke Brown had the easiest of finishes when the cross came in. 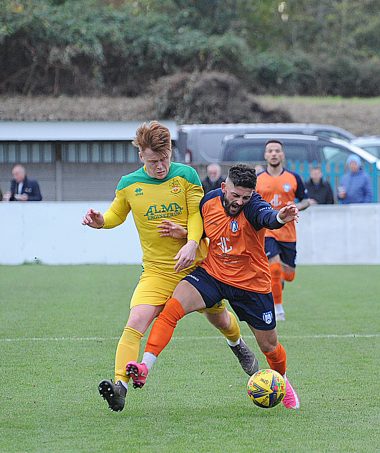 Defender George Heaven had a header cleared off the line on 32 minutes as the hosts threatened but it was no surprise when the Canaries doubled their advantage shortly before half-time when Hitchin broke and Belford was forced into two magnificent saves.

When the ball was returned into the Town area for a third time, Marcus Gouldbourne squeezed in behind Sharpe at the far post to head home from the narrowest of angles.

Hitchin continued to look the better side after the interval and Belford had to save from Gouldbourne before the visitors had an effort ruled out for offside.

However, the home side finally gave Hitchin something to worry about when Heaven nodded home superbly from Will Grocott’s corner on 67 minutes.

Town continued to press but could find no clear opening despite Hitchin’s Ben Walster being dismissed on 86 minutes following an off the ball incident with Kynan Isaac.

Stratford will aim to bounce back on Saturday when they visit Lowestoft Town who, like Davis’ side, have nine points from six matches.

TOWN have been drawn to host Kidsgrove Athletic in the FA Trophy third qualifying round on Saturday, October 31.

The Staffordshire side play in Northern Premier League Division One West – a level below Stratford.