Stratford youngsters are head above the rest at Evesham

Competing over the 1,900m course on Saturday, the WJ18 doubles of Amelie Sartain and Fleur Griffiths and Freya Watts and Lucy Browne, with the latter also racing up an age group, were rivals in their race, with Sartain and Griffiths victorious ahead of Evesham in second and Watts and Browne taking third place.

In Division Two of the WJ18 coxed fours, the performance squad crew of Browne, Ruby Howells, Bella Chappelhow, Harriet Holmes and cox Toby Sartain, who steered a near perfect course to take advantage of faster water, took the win.

In the final division of the WJ18 coxless quad, the crew of Watts, Howells, Amelie Sartain and Griffiths took an emphatic win, beating their nearest opponents by an impressive 43 seconds.

The J17 double of Tomi Wilcock and Will Beattie, racing up an age group in the J18 event, put in a strong performance to finish in second place, just five seconds behind the winners from Hereford Cathedral School.

In the J18 singles were next, Stratford’s trio were racing up an age group. Will Beattie had the best result finishing in second place, just three seconds behind the winner while Tomi Wilcock was fourth and Toby Sartain tenth.

Honour Keil put in a solid row in the WJ18 singles. to take fifth place in a strong field.

“It was great to get some good racing under their belts and even better to come away with three wins and really solid performances,” said J17/J18 performance squad coach Abi Terry.

The WJ18 Club Group of Emma Harrison, Elisabeth Edwards, Imogen Hill, Martha Ussellman and Lucy Sartain raced against the Club’s WJ 17/18 Performance Squad in a coxed four. In their first race in this crew combination, the girls put in a strong race to come in a very credible 11 seconds in second place with a time of 9:01 minutes.

J16 squad single sculler Charles Happel really attacked the 1,900m course and His race plan paid off with a strong second place losing out to a local Evesham sculler by just three seconds.

Uche Nwachukwu raced in a large field of 15 athletes displaying her excellent technique by finishing in a creditable fifth place. 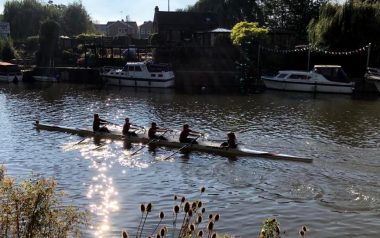 The WJ14 Squad powering down the course at Evesham Head.

The J15 boys double missed out on gold, beaten by the home crew of Evesham by 22 seconds.

The three WJ15 doubles did superbly for fourth, sixth and seventh against well-drilled crews from Evesham and Headington School Oxford.

J15 coach Hugo Happel said: “Our boys and girls sculled superbly in their first-ever head race over 1,900m upstream. They can row that longer distance and steer well on this challenging course. We now go back to training and look forward to Henley Long Distance Sculls in November.”

Also making their first debut at a head race were the J14 Squad. In Division One the coxed quad of Alice Jones, Meg Nuttall, Sophie Evans, Poppy Baines and Lily Warren rowed very well against stiff competition from Evesham, Abingdon and eventual winners Headington School. Given they have only rowed the distance three times, the girls  were well placed by the second check point.

Seth Vondrak, Oliver Rowlands, Alexandra Francis and Meg Nuttall raced in Division Three double sculls. Due to a lack of competitors the girls rowed in the junior boys’ event. Both crews rowed exceptionally well, achieving a well-deserved second and third place after being pipped at the post by a crew from Abingdon.

“Given their results the future looks promising for the J14 squad,” said J14 coach Colin Bell.