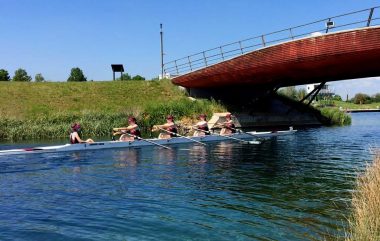 Stratford’s junior 15 quad team stormed to success in the B final.

DESPITE a lack of an audience to urge on Stratford-upon-Avon Boat Club’s rowers, the junior squad impressed across all fronts at Eton Dorney last weekend.

In the the National Schools’ Regatta, competed over a 2,000 metres Olympic distance, Stratford’s two under-18 teams took part in the behind-closed-doors event across their rivals from other rowing schools and clubs nationwide.

The club’s best result came from Alice Baines and Amelie Sartain in the Championship Double Sculls, in which the pair ranked 22nd overall.

For the junior 16s, a WJ16 coxless team recorded a 26th place finish in the time trial event against stern competition.

The rest of the J16 squad were in action in time trial events at the Junior Sculling Regatta, where Tomi Wilcock and Will Beattie advanced to the doubles B final and eventually finished second. Toby Sartain placed fourth overall in the C final of the single sculls. 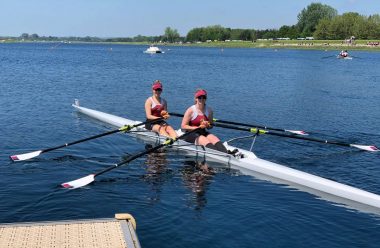 Honour Keil and Harriet Holmes battled hard in the C final of the J16 double sculls.

Honour Keil and Harriet Holmes were fifth in the C final of the double sculls, despite threatening to finish higher.

Also in action was Stratford’s J15 side, who were well represented in the A, B and C time trial finals.

Grace Beason and Ruby Brooker-Collins made their way into the C final of the double sculls after clocking 9mins 29secs in their heat, and, after a strenuous race, placed sixth overall in 10:42 over the full 2,000m course.

In the single scull event, Charles Happel appeared in the B final after a time of 8:37 in his heat, going on to narrowly finish behind the podium places in fourth in a time of 9:32.

In the girls’ category Uche Nwachukwa agonisingly missed out on a place in the final by six seconds after placing seventh in her time trial.

Finally, the quartet of Maddie Hall, Harriet Noyes, Kate Richardson and Amalia Richardson – coxed by Imogen Hill – raced in the B final after clocking 8:02 in their time trial. Undeterred after narrowly losing out on a place in the A final, Stratford finished three lengths clear to win in a time of 8:47.