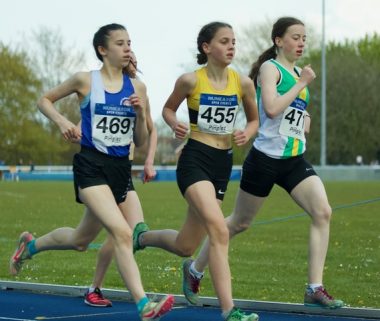 Niamh Hillard, centre, was one of two Stratford runners to set PBs in the 1,500m race.

Tearing up the track at the Pingles Stadium in Nuneaton once more, 16 athletes in all represented Stratford on Saturday afternoon, as personal and club records took a beating.

Alex Adams shaved more than ten seconds off Stratford’s 3000m record for under-17 runners, crossing the line in 9:22.56 to do so.

While Dave Wilson was able to beat his own best time of 62.02 seconds in the 400m race, he fell narrowly short of beating his own 100m previous best with a finish of 13.33 seconds.

Imy Sheppard had a reversal of fortunes in the 400m’s, beating her teammates score with a 58.04 time, but crossing just over 0.3 seconds slower than her previous best.

Ruby Edwards starred in both the 75m hurdles and long jump events, achieving a time of 14.62 seconds and 3.82 metres respectively.

Seb Hillard was another Stratford member to participate across a number of events, running the 80m hurdles in 15.47 seconds and achieving a throw of 24.28m in the U15 javelin – an event which Alex McMilan reached a 21.24m throw.

The club had two representatives in the shot putt, as under-13 competitor Arthur Mansbridge debuted with a 3.76m throw, while veteran Paula Williams returned to impress with a 11.34m score.