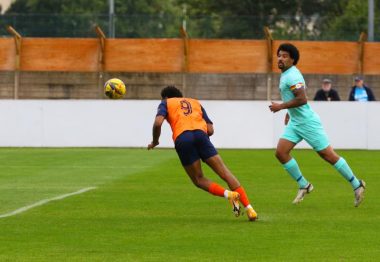 GOALSCORERS Jaanai Gordon and Will Dawes paid tribute to their teammates, after continuing their fine personal scoring starts to the season in a 3-0 defeat of Royston Town last weekend.

The result made it back-to-back wins at the Arden Garages Stadium and pushed the Bards into the Southern League Premier Central play-off places after just three games played this season – a premature position to read too much into at this stage, but a good omen for the remainder of the season nonetheless.

And with a double header against St Ives Town, who Stratford visit on Saturday, followed by a home meeting with Banbury United, Gordon believes his side will continue to keep picking up results with their defensive solidity.

“I think the way we play suits me, I just thought that after not scoring on Tuesday night, I had to bounce back and score another today to make up for it,” he said.

“So I think three goals in three is a good start for me, and hopefully there’ll be more to come.

“[Having a strong defensive line] gives us a solid base to play from, knowing the whole back line will stop goals from going in.”

A sumptuous Jack Self cross provided Gordon with the perfect opportunity to net a third-minute breakthrough, heading cleanly past Royston’s Joe Welch. 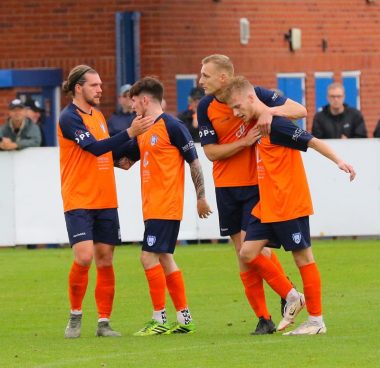 Will Dawes, far right, is congratulated after his last-gasp penalty. Pictures by Paul Grant.

Jimmy Fry should have made it two for Town but for a goal-line clearance, while Spyros Mentis crashed a header against the bar down the other end in an entertaining opening half.

With Stratford remaining in front at the break, it took until the 65th minute for the hosts to double their advantage when Gordon thrashed home from Daniel Lafferty’s through ball.

The Bards could well have imploded after Kynan Isaac saw a straight red with 22 minutes to play, but their response was to instead keep impressing in attack and eventually sealing the three points through Dawes’ 90th-minute spot-kick.

And the man who wrapped up victory was wary of making the scoreline sound too straightforward.

“The result showed what a great group of lads we’ve got, we had to dig in a bit even though 3-0 sounds very comfortable,” said the 20-year-old.

“It was hard at times, and for myself it was nice to score in back-to-back games and make it two goals in two.”

As far as the club’s FA Cup aspirations are concerned this year, the Bards will visit Carlton Town of Northern Premier League Division One Midlands on Saturday, September 4 in the first qualifying round – following this week’s draw.