Town athletes put down a marker - The Stratford Observer

Town athletes put down a marker 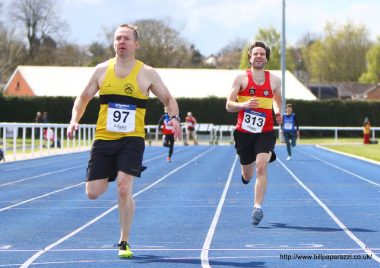 Number 97 Dave Wilson still looked sharp on the track in the 400m race.

RECORDS were there to be broken by Stratford-upon-Avon Athletic Club members in the opening track and field event of the season in Nuneaton.

The club were represented by 17 athletes in all at the Pingles Stadium, ten of whom walked away with new personal-best times to their name to lay a marker for the rest of the year’s events that lie ahead.

Taylor Stubbins was first to cross the line in the blue ribband 1500m race, finishing in 4:17.12 – ten seconds faster than his PB – while teammate Olivia Robinson equally impressed by shaving eight seconds off of her previous fastest time by coming home in 5:02.21.

As a result, the pair sit eighth and 13th respectively in the UK rankings for their age groups, a foundation which they will undoubtedly be keen to build on.

In the junior section, Alex Adams tore up the track with a scintillating 4:23.64 run – which places him 13th in his age category and would have seen him challenge in the adults’ race.

Maisie-Joy Spriggs proved her capability over 1500m and flew across the finishing line in 5:09.90, a time that comfortably pits her amongst the fastest 20 UK runners across the distance for her age.

Charly Marshall was next to hit a personal-best time in the same race, finishing shortly after Spriggs in 5.10:22, while Niamh Hillard and Ellie Deaner completed the line-up in 5:18.79 and 5:23.68 respectively.

In the 800m juniors race, five of Stratford’s young guns showed their promise on debut for the club.

Winning the heat, and subsequently placing 13th in the UK for his age group, Caleb Spriggs clocked a 2:04.57 finish to unsurprisingly secure a new personal best, before his sister Maisie-Joy returned for her second race of the day to cross in 2:42.44.

Over a shorter distance, Maddie Linfoot went sub-50 seconds with her 48.18 time in the 300m race – the first time she has managed the feat – with Ellie Peeke performing admirably in her first appearance at this distance in 51.1.

Masters athlete Dave Wilson showed just how it is done in the 400m event, finishing third in the UK rankings with a 63.28 PB time, with fellow veteran runner Brian Gravelsons shaking off his injury struggles to score 14.43 in the 100m competition. 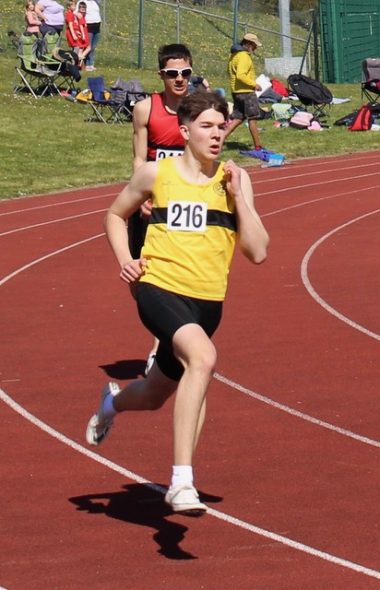 Harry Gravelsons impressed over two distances in Nuneaton and Kettering.

The Gravelsons was also represented by Harry, who beat his father’s score in the same event by finishing in 12.61, finished soon after by Dave Wilson (13.24).

Rounding off the day’s action was Seb Hillard, who scored 4.55 in the long jump to provide another example of his talent across multiple events.

Seemingly not content with his fine showing in Warwickshire, Harry Gravelsons also competed in the Kettering April Open – this time in a 400m run – to further demonstrate his proficiency across various distances.

Considering his pre-season training had largely focused around improving in this particular race, there were plenty of signs to suggest that those hard yards had indeed been put in, as more than two seconds were removed en route to a new PB of 54 seconds and 40 milliseconds.