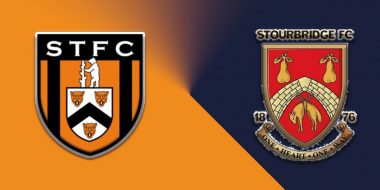 AN INSTANT response is sought by Stratford Town in tonight’s Southern League Premier Central clash with Stourbridge (7.45pm), having been dumped out of the FA Cup by Nuneaton Borough last weekend.

Jordan Williams’ 92nd-minute strike was unable to claw Town back into the contest, having conceded late in either half to Oliver Bassett and Leroy Lita to go down 2-1 in the second qualifying round tie at Liberty Way Stadium.

It will be a tough ask for Paul Davis’ troops, considering the strong start to the season made by the unbeaten Glassboys – who have taken two wins and two draws to date to sit second in the table.

Incidentally, both of those stalemates, a 2-2 draw with Biggleswade Town and a deadlocked 1-1 contest with Nuneaton Borough – have come in Stourbridge’s most recent games.

Stratford find themselves two points behind in sixth having played a game less, winning two of their three league fixtures – with the 3-1 triumph over Alvechurch last week atoning for a disappointing 4-2 defeat to Needham Market.

After a drab opening in Saturday’s cup tie, Ashley Sammons created the first opportunity for Stratford with a pinpoint ball into Callum Powell – the striker’s eventual chip over the advancing Tony Breeden dropping onto the top of the net.

With the half-time break beckoning and both sides seemingly set to go in goalless, some slack defending gifted Nuneaton the opener when Bassett was handed the ball on a plate to score from close range.

A mistake by Daniel Vann meant Stratford almost shipped a quickfire second, though Ryan Edmunds was unable to convert after going clean through.

Stratford emerged the better side from the interval, threatening to get themselves on level terms when Will Grocott’s venomous effort flew just off target.

Strong appeals for a penalty were waved away as the visitors pressed forward looking for parity, referee Simon Brown adjudging the foul to have been committed outside the area.

Grocott went close again when another fierce hit was headed off the line by a Borough defender, as the hosts refused to wilt under pressure.

The game looked to be settled when former Bristol City and Reading striker Lita found the net with a fizzing cross-shot that had Ty Belford beaten on 83 minutes.

While Stratford continued their forward charge, a last-minute header from Williams proved too little, too late – despite their good play.